Caillois introduced a spectrum from paidia (“play”, improvisation) to ludus (“games”, ordered, rule-bound, requiring skill or effort). To play a thing (or play with a thing) is to explore it in some sense. As I’ve noted before, to game a thing (eg. gaming the system) is more directed and manipulative. The relationship between play and games is complicated (and maybe contradictory). Generally, I usually argue that play is a broader concept and that games are a subset of play’s illusory disposition. Play as an attitude also applies to fiction, to social life, and to ritual. Instances of play are all optional, although there are social costs involved with opting in or out.

Bernard Suits once claimed that “playing a game is a voluntary attempt to overcome unnecessary obstacles.”

In A Theory of Fun for Game Design, Raph Koster claimed that “Fun is just another word for learning” through interesting challenges.

Games might attempt to accomplish this by creating goals (put the ball into the hole), introducing rules (you can’t just pick up the ball- you have to hit it with a stick as few times as you can from where ever it stops), and sometimes introducing environments (in this case, literal terrain). Good feedback and a sense of mastery may drive the player to pit her skills against the challenge of the system and induce flow, which is a pleasure in itself. As skills increase, a game may be able to scale challenge accordingly (or, in more open forms of play, the challenge always existed and can now be realized by the more skilled player). Unlike some real-life scenarios, few games are constructed not to be playable.

Play cannot be forced, only afforded in a system, or encouraged in person.

I used the word ‘affordance’ a lot early on, but now haven’t really used it very much for a few months because I stopped explicitly talking about design. A functional affordance is a possibility for action, latent in the designed artifact itself but recognizable and actionable to the user. Knobs and wheels afford turning. Buttons afford pressing. The possibility for an action is clear just by encountering it- at least, for someone who has already mapped the mechanics of an artifact to an experience they recognize. A rhetorical affordance (a much less common concept) affords a narrative instead of a function. A diagram lifted from an old post: 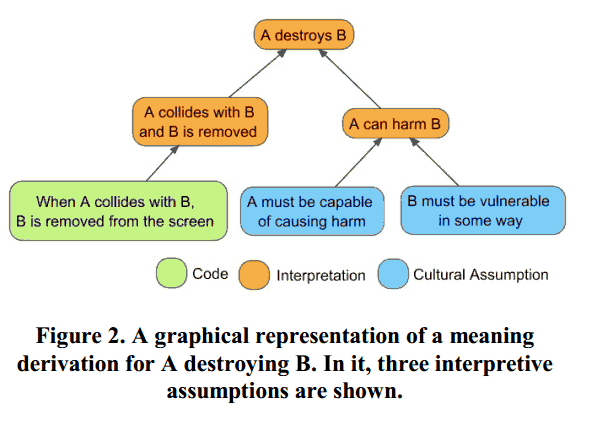