As noted before, there are three pillars of political development: a strong central State, Accountability, and the Rule of Law. Fukuyama argues further that the order of these institution’s development create interactions that strengthen or inhibit other institutions and affect national development in different ways. These patterns are not meant a single consistent story of “stone age to modern states”

I built these charts below based on illustrations in the book: 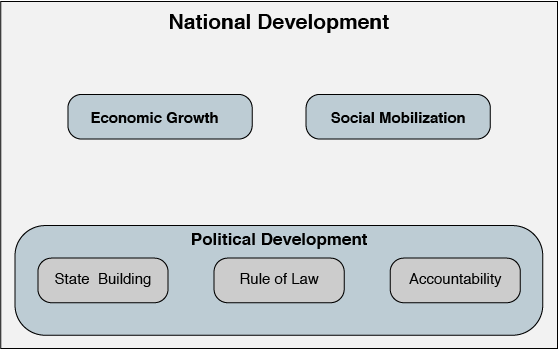 I. Prussia as an example path to the Modern State 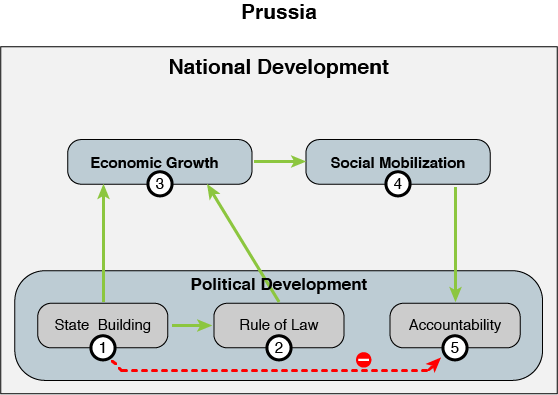 Not all good things go together.

Many of the earliest and most effective bureaucratic states have a developmental history of authoritarianism and warfare. Fukuyama focuses on one of the first “modern states”, Bismarck’s Prussia, once described as “an army with a state.” The State developed first of the three pillars of Political Development, out of existential necessity [Step 1, above]. The supposedly absolute Emperor ruled through an increasingly institutionalized bureaucracy that provided a level of transparency and regularity. The institution of “Rule of Law” was further developed.

The culture provided a landscape that allowed this. “Rule of Law”, Fukuyama has argued, often has its roots in religious authority and traditions of a hierarchy actively interpreting religious doctrine. “In Christian Europe, following the Catholic church’s revival of Roman law in the eleventh century, a wide range of legal institutions were created centuries before the first absolutist monarch began accumulating power in the late sixteenth century.”

According to Fukuyama, Prussia is an example of a common [but not inevitable] pattern of modern, nonpatrimonial states evolving out of military competition providing pressure on states to be effective, somewhat meritocratic delegators of complex tasks. Similar patterns can be found in Qin and Han China two millennia before Prussia, and also in Japan and in Europe in Sweden, Denmark, and France.

The strong central military-birthed state was not particularly conducive to the institutions of Accountability, as one might expect. Countries that developed democracy before a strong State had a different set of challenges.

It’s worth noting that only modern states can make proper sense of our feelings of what “corruption” means. If the Emperor owns the state and everyone and thing in it, there is no separation between the public and private sphere, and anything you extract was fair game anyway.

In case we need to step back to “why corruption is bad”: it distorts economic outcomes in a way that we generally agree is not helpful, and it damages legitimacy of the government. Charges of corruption in fledgling democracies are more often the telltale signs of a power grab than they are a herald of reform.

Fukuyama identifies two activities generally confused with corruption but are “not identical” to it: rent-seeking and “clientelism” (or “patronage”).

“The patronage-dispensing Big Man and his followers has never been fully displaced as a form of political organization up through the present.” Factionalism and “inner circles” are not deviations, they are natural and expected patterns of human sociability. This is true even for our modern tyrants. Stalin had his pals from Georgia led by his head of secret police Lavrenty Beria; Saddam Hussein’s personal network tribesmen were in Tikrit. The Chinese Communist Party has tribal factions that cooperate and, sometimes, [quietly,] don’t. Less-developed states are more obviously dominated by these tribal networks in the absence of [in-theory] impartial organization 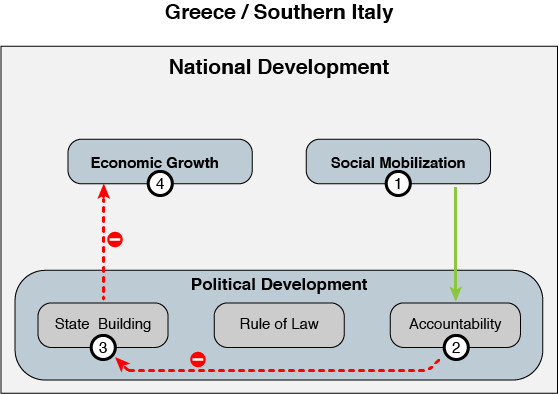 Fukuyama cites Greece and (especially southern) Italy as “low-trust” societies with very clan-centric, clientelistic tendencies that were not offset by a strong state before being introduced to democracy.

Greece does not have a strong tradition of statehood, starting the modern era as an Ottoman province. Greek independence required significant outside help, and outsiders continued to influence Greek politics and borders for decades hence. Even as the far-left parties offered potentially clientism-shaking ideologies, the United States acted in its own interest to support Greek Clientelism over Greek Communism. Greek society today still deeply distrusts and resents foreign influence and often sees its own state machinery as illegitimate or Other. Tax evasion in Greece is widespread, and since public offices protect themselves from purging, party switches in Greece often result in added offices to install party faithful, creating a gluttonous and ineffective public sector. Capitalism arrived late to Greece- capturing public resources was an easier way to get wealthy. Urbanization managed to keep rural village patronage networks intact.

Britain has historically had “patronage-ridden bureaucracies” until a wave of changes (effectively over the course of 15 years in the mid-nineteenth century) enforced a much more meritocratic system during a values-revolution from the passions to the interests, a change driven by idealistic elites and reported to the supportive new industrial-era middle class by the new mass media. The Crimean War spurred the process by fostering a demand for a leaner, stronger bureaucratic machine.

IV. Clientelism: Invented by the United States of America 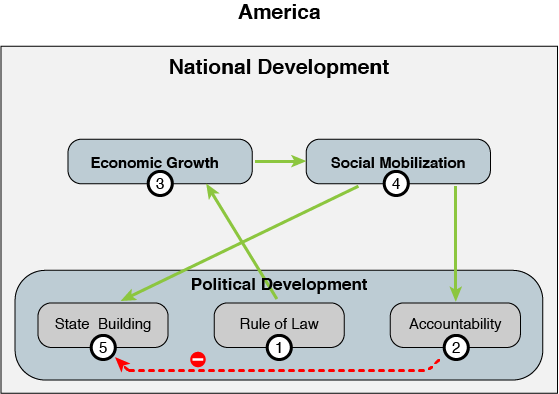 The United States of America effectively invented modern clientelism. Huntington attributed our constitutional system of checks and balances to an intellectual Tudor heritage that England would abandon after exporting. This system would make public policy change difficult. There is no strong elite class to force changes through our system as there was in England. With the Jacksonian revolution, the United States expanded its voting franchise far wider than the European nations of that generation. President Jackson took many of the elite-patronage government appointments and made them shorter-term offices to offer to party loyalists. This early mass-clientistic system is often referred to as the “spoils system” in US History books.

Within the United States, the two institutions of constraint were highly developed: Rule of Law (the constitutional system, empowered by courts) and Accountability (clientelistic democracy empowered by the political parties). Post-Jackson America was a “state of courts and parties,” as it was said. On the other hand, we lacked the strong traditions of a centralized bureaucratic state. Not that there was necessarily a crying need for a particularly strong state in early agrarian America.

The Civil War proved an impetus to begin constructing an industrial-era bureaucracy, putting the patronage-ridden Union army through the crucible of war and at the same time forging a national identity to supercede individual state identities. Reconstruction tampered the emerging centralized state, however, and by the 1870’s a newer and more organized form of clientelism, the “political machine”, emerged. The machines enfranchised many poor and marginalized groups in the United States, but at the cost of an effective and efficient government bureaucracy.

As is usually the case with reform, the case built from within but languished as stakeholders were not really all that interested in changing things. Eventually, President Garfield was shot by an unbalanced man who believed he should’ve been “appointed US consul to France”. Garfield would die two months later, and in the meantime the public was incensed. Chester Arthur and his Republican congress resisted but the Democrats and the Republican “Mugwumps” persisted. A wave of Democrats were elected against the patronage-supporters, and so the old Congress didn’t even wait for them to be seated before passing the Pendleton Act by overwhelming majorities.

“Critical to the success of state building is a parallel process of nation building, an often violent and coercive process…” State-building is the construction of tangible institutions. Nation-building is about intangible institutions like “national traditions, symbols, shared historical memories, and common cultural points of reference.”  It’s a matter of legitimacy: the creation of an identity strong enough to take a place above tribal or ethnic loyalties. It can be fostered top-down through requirements of language or religion or education but is as often built from the bottom-up.

National identity projects are usually the result of the four processes below, often interacting:

1. “Moving borders to fit posited national identities.” (Expansion in the case of Germany and Italy, reduction in Turkey and the Austro-Hungarian empire).

2. Moving or eliminating populations to create a more homogenous area.

3. Cultural assimilation. (Though we might think it after the first two options, this one is not necessarily a bloodless process.)