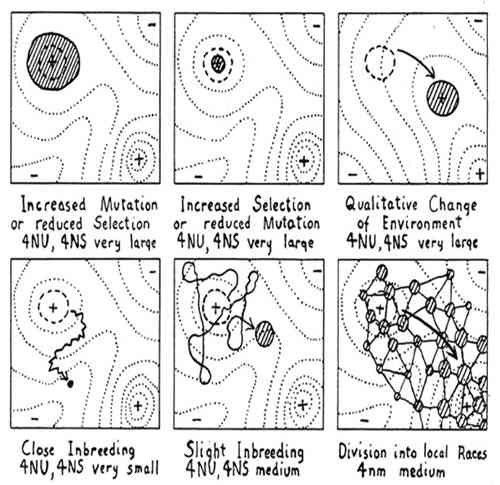 The first two illustrate how low selection pressure or a high rate of mutation (which comes with small populations) can broaden the range of a species whereas intense selection pressure or a low mutation rate can severely limit a species to the very peak of local fitness. The third diagram shows what happens when the landscape itself shifts, and the population has to evolve to shift with it.

The bottom row explores how small populations respond to inbreeding by wandering ineffectively. The best mode of exploration Wright deemed the final diagram, showing how a species can divide into an array of races that interact with one another. That jostling crowd explores well, and it can respond to opportunity.

Fitness landscapes express so much so economically. There’s no better way, for example, to show the different modes of evolution of a remote oceanic island and a continental jungle. The jungle is dense and “rugged” with steep peaks and valleys, isolating countless species on their tiny peaks of high specialization. The island, with its few species, is like a rolling landscape of gentle hills with species casually wandering over them, evolving into a whole array of Darwin’s finches, say. The island creatures and plants “lazily” become defenseless against invaders from the mainland.

You realize that for each species, its landscape consists almost entirely of other species, all of them busy evolving right back. That’s co-evolution. We are all each other’s fitness landscapes.

Over the past two decades I have been involved with the war on excellence.

I know that those few of us actively involved in the struggle are deeply worried about the epidemic of excellence precisely because excellence compels its hosts to facilitate its spread by altering their perception of its costs and benefits. Most educated people have come to revere the spending of the fabled ‘10,000 hours’ in training to become respected jacks of one trade. Large numbers of Americans push their inquisitive children away from creative play so that they can excel in their studies in hopes they will become excellent candidates for admission to a center of excellence, to join the pursuit of excellence upon graduation.

The problem with all this is that we cannot excel our way out of modern problems. […]

Going back to Sewall Wright’s theory of adaptive landscapes of fitness, we see four modes of human achievement paired with what might be considered their more familiar accompanying archetypes:

A)   Climbing—Expertise: Moving up the path of steepest ascent towards excellence for admission into a community that holds and defends a local maximum of fitness.

B)   Crossing—Genius. Crossing the ‘Adaptive Valley’ to an unknown and unoccupied even higher maximum level of fitness.

D)   Shaking—Rebellion. Leveling peaks and filling valleys for the purpose of changing the landscape to be more even.